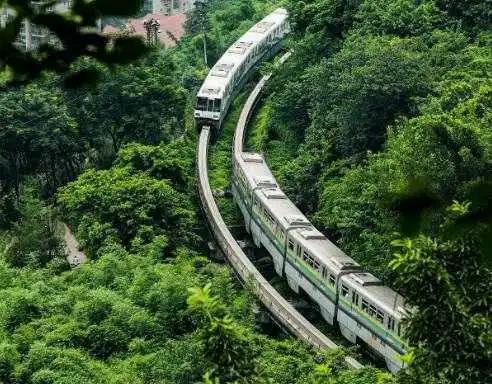 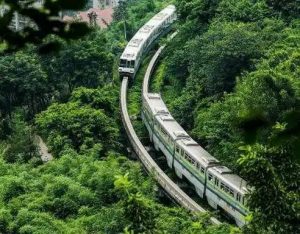 Fast and convenient rails are a greener alternative to buses, and fun in themselves
There’s something enduringly romantic about rail travel. The fast speed, the gentle rhythm of the tracks, even you can spend hours admiring the view, chatting with your friends, watching sunrises and sunsets as you roll ever on. 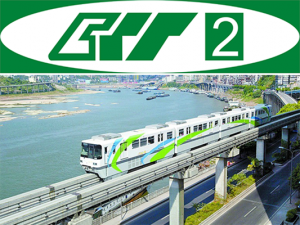 For example Chongqing metro line 2, also named Light Rail line 2 or Rail Transit Line 2, is the first monorail in China and the first subway line in the southwestern area. After more than decades of development since it was first operated in 2004, Line 2 starts from Jiaochangkou in Yuzhong district and terminates at Yudong in Banan district, which covers a length of 18.6M, with 25 stations in service
Due to its epic eﬀects, the system will run along its own dedicated corridor, greatly reducing its interaction with other road traﬃc, increasing both safety and speed for shorter journey and business hours.
Of course, it’s generally more comfortable to catch a taxi in this city, but if you don’t have to, why not take a light rail? Then you will be able to understand the connections between places, and see the scenery among the districts in our city.

Useful tips:
This is the latest Chongqing Metro map with all stations and route modifications 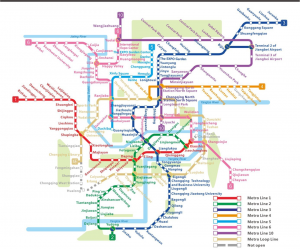 (This map was quoted from Chongqing Expats Guide )

It is a smart idea to have a printed copy of the Metro map handy in your bag for when you need to plan your route around the Metro system.You can access and print the latest map here and access the oﬃcial website of the Chongqing Rail Transit.

Busiest Times to Ride the Metro:
For non-Chongqing and local people, the Chongqing Metro might seem crowed according to different Lines and times. However, specific times of the day are much more crowed than other public transport tools. Weekday mornings from 6 AM – 9 AM probably the most congested as well as weekday evenings from 17:00 PM – 19:00 PM. The Line 2 and Line 3 should be the most crowded during the working hours.

How to take the Chongqing Metro

Step 1: Find your location and destination

Step 2: Get to the nearest Station

Step 4: Enter the Turnstile, get on the right platform

Step 5: departing the Metro, and choosing the right Exit

Chongqing Metro fare costs is reckoned by distance, the minimum price is CNY 2 and passengers are allowed to make Metro transfers for free within 1 hour from the time their Chongqing Public Transportation Card (Yiju Changtong Card) is swiped, however, The card can also be used on other public transport tools such as city bus. Holders can enjoy a 10% off the ticket fare while taking the subway.